This weekend, as we are bombarded by television and newspapers ads of Washington and Honest Abe touting presidential savings on cars and dishwashers, I want to reflect on how Washington's birthday was observed 150 years ago in the midst of the Civil War. As I noted in a previous post, both Northern and Southern leaders sought to link their respective causes with the legacy of George Washington.  These efforts can best be seen in the February 22, 1862 observances of Washington's birthday observances in the Union and Confederate capitals. 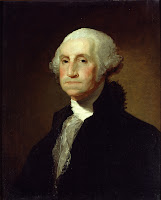 The 1st US Colored Troops at Roosevelt Island

Theodore Roosevelt Island,  a small island located in the Potomac River between Rosslyn, VA and the Georgetown waterfront, is maintained by the National Park Service in honor of our nation's 26th president. However, during the Civil War, the 80 acre island, then known as Mason's Island or Analostan Island, served as a training camp for the 1st United States Colored Troops (1st USCT), an infantry regiment of African American soldiers recruited in the District of Colombia in 1863.  The island was occupied by Union troops at the outset of the war and used for various purposes.

As the number of Union wounded and ill mounted, Alexandria's public building, churches, and even private homes were pressed into service as military hospitals.  At least twenty of Alexandria's largest buildings were transformed into hospitals during the war.  In January  1861, the U.S. Government took possession of Alexandria's Methodist Episcopal South church on Washington Street for use as a hospital. Like most other Alexandria churches, the Southern Methodist congregation was considered to be "secesh," so Union authorities had no qualms about seizing it.
Read more »
Posted by Steven at 4:43 PM 2 comments

Welcome to my blog regarding Washington, DC and the Civil War. This blog will focus on those sites in Washington and its close-in suburbs (i.e. locations within the Beltway) that have connections to the Civil War and help tell the story of the role our nation's capital played in ensuring that "... government of the people, by the people, for the people, shall not perish from the earth."

Steven
Mild-mannered civil servant by day... by night, amateur historian defending truth, justice and the American Way one blog at a time. Grew up in the Washington, DC suburbs and Oklahoma... dreamed to be a National Park Service ranger at a Civil War battlefield, but realized that I don't look good in tan and green.