The Unmarked Site of the July 2, 1881 Assassination of President Garfield

Today, the National Gallery of Art’s West Building stretches along the north side of the National Mall  from Fourth to Seventh streets at Constitution Avenue, NW.  From 1872 to 1907, the Baltimore & Potomac Railroad Station stood on the site at 6th and Constitution Avenue, then called B Street.  Few are aware of  the assassination of a U.S. President that occurred there on the morning of July 2, 1881. 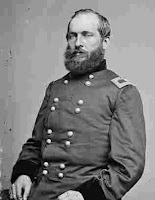 Ohio politician James A. Garfield rose to the rank of Major General of Volunteers while serving in the Western Theater during the Civil War .  Garfield resigned his commission to assume a seat in Congress, which he had been elected to in October 1862.  He served in the House of Representatives until elected to the presidency in November 1880 as a dark horse candidate. (Library of Congress)

On July 2, 1881, President Garfield entered the B&P station to board a train for a summer holiday.  The President was accompanied by his son and several Cabinet members, including Secretary of War Robert T. Lincoln, but no bodyguards.  Waiting at the depot was Charles Guiteau, a mentally unbalanced office-seeker armed with a pistol who had been stalking the president.  Garfield was walking across the ladies' waiting room at approximately 9:30 AM when he was shot twice and mortally wounded by Guiteau.   The president died from his wounds-- or arguably from the infections that his doctors inadvertently introduced while treating him-- 11 weeks later.

The Washington Evening Critic expressed the nation’s immediate shock at the senseless act of violence in the midst of peace:  “The assassination of Lincoln, coming as it did at the close of a long and desperate war and as the last expiring hour of that war’s fierce hate and passion, was an infinitely more logical event than this horror.”

However, there is not a single historical marker or sign on the former site of the depot indicating what occurred that warm July morning in 1881.  Ford’s Theatre and the Texas Schoolbook Depository are infamous buildings in American history.  Even the site of President McKinley’s 1901 assassination in Buffalo is marked with a small plaque.  The former site of the B&P station is the only unmarked presidential assassination site.

In December 1881, the Pennsylvania Railroad Company placed a marble tablet on a wall in the depot in honor of the late president.  Additionally, a bronze or brass star was installed in the floor to mark the spot where Garfield had fallen after being shot.  However, an 1897 New York Times article noted that the railroad frequently received "complaints from people who disliked to be reminded of the great crime every time they had occasion to take a train or to enter the waiting room," and that company officials considered the marker to be bad for business.  After a small fire in the station in March 1897, the company quietly removed the star and the tablet from the depot under the guise of making repairs.  They were apparently never reinstalled.

With the opening of Union Station in 1907, the the railroad tracks bisecting the National Mall could finally be removed.  The last train departed the B&P Station just after midnight on November 17, 1907.  The Washington Times proclaimed that “the station will always remain an object of reverence of the American people, as it was the scene of the assassination of President Garfield…”

However, the nation moved on and forgot.  In 1911, The Washington Post noted that the 30th anniversary of the shooting passed largely unnoticed in Washington and not even a wreath was placed on the Garfield statue at the foot of the Capitol.
Under the terms by which the B&P Station was originally erected, the Federal Government re-assumed control of the property following the station’s closure.  Some Washingtonians advocated converting the old station into an armory for the District’s National Guard.  However, President Theodore Roosevelt, as part of an effort to improve the Mall's overall appearance, ordered the historic building torn down without consulting Congress.

The vacant lot was selected as the site for a new National Gallery of Art, which opened in 1941.  The Gallery designers apparently considered it inappropraite to install a star or tablet to mark where Garfield had been shot.  In his book Shadowed Ground:  America's Landscapes of Violence and Tragedy, Kenneth Foote notes that there is often "resistance to marking the site of an assassination because of the sense of shame that surrounds it."

In 1936, a Washington Post reporter interviewed Sylvester Breen,  one of the last known witnesses of the assassination.  In the interview, Breen expressed his desire  that a permanent marker be erected someday on the spot where Garfield was shot.

In 1952, the  Committee on Plaques for the National Capital Sesquicentennial recommended placing a historical marker on the grounds of the National Gallery to note the site of Garfield's assassination.  However, a marker was never erected.  131 years after the assassination, this tragic episode in U.S. history remains unmarked.

Welcome to my blog regarding Washington, DC and the Civil War. This blog will focus on those sites in Washington and its close-in suburbs (i.e. locations within the Beltway) that have connections to the Civil War and help tell the story of the role our nation's capital played in ensuring that "... government of the people, by the people, for the people, shall not perish from the earth."

Steven
Mild-mannered civil servant by day... by night, amateur historian defending truth, justice and the American Way one blog at a time. Grew up in the Washington, DC suburbs and Oklahoma... dreamed to be a National Park Service ranger at a Civil War battlefield, but realized that I don't look good in tan and green.